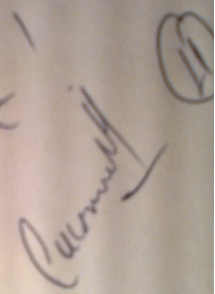 Seems like it happened yesterday! I was only a teenager, when FCM Bacău was playing a game… Guess it was a friendly one. Not so sure, but this is not important. What counts is that, when I was sitting in the stand, in my left side below I spotted someone very important for the team. Cătălin Cursaru, the top scorer of the squad was watching the game alongside the fans. I gathered my courage and went to ask him for an autograph. He smiled and signed my paper. I was shaking a bit because he really was a star in the first league and a true symbol for the local team. It was in 2004, when rumors about a transfer of his, to Queensland Roar, in the Australian League, increased with everyday passed. So, I wished him: ‘Good luck in Australia, Cătălin!’ He smiled back again… But the transfer never happened. Cursaru remained one more year at FCM and after his career decreased dramatically.

No questions, no other ads and even no comments. I wrote about Cursaru little more than a year ago. So it’s no point of repeating all his achievements, but I want to share here, with you, his complete numbers regarding the goals he scored for FCM Bacău: the match, the date, the competition, the score at which he netted. Everything! Check them out, because it’s a pretty cool statistic! And also, I added a photo of Cătălin in the shirt of the national football team. Even tough he didn’t manage to appear in one single match for the first side, he managed to gather a couple of caps with the second team and also scored a couple of times. 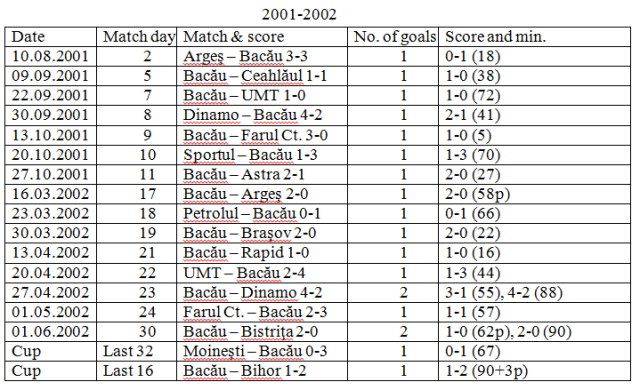 Total: 52 goals (49 in the League Championship, from which four penalty strikes, and three in the Cup competition)

Cătălin Cursaru scored his goals in the net of 18 teams: seven against Dinamo and Farul, four against FC Argeş and FC Braşov, three between the posts of Steaua, Oţelul, Petrolul and Bistriţa, two against Rapid, Ceahlăul, Naţional, Gaz Metan, Craiova, UMT, Craiova and Astra and a single one in the net of Moineşti and Bihor, the last two in the Cup. But more than number and statistics, other amazing things are revealed. FCM Bacău was a good team on home soil in that period and Cursaru contributed essential to this fact. What do I mean? Well… in all the 22 home league games in which Cursaru scored, FCM didn’t lose! In fact 19 of this encounters were victories of the hosts and also could have been the other three, because the opponents grab a point, always, in the last seconds! So, from those 49 league goals, Cătălin scored 29 in front of his fans. The rest of 20 were netted in 15 away matches. Last, but not least, I will mention that form the total of 52 competitive goals, only 19 came in the first half, the rest of 33 being netted in the last 45 minutes.