Maybe Vasile Maftei isn’t the best defender that played in Romania but his incontestable quality of working very hard brought him in front of the scene lights at every club that he played. Born on 1st of January 1981, in Falticeni, he couldn’t be less special than his birth date. At Rapid Bucharest he arrived at age of 19 and spent in Giulesti nine seasons. Nine! He became champion alongside Rapid in 2003 and won also three Romanian Cups and same number of Super Cups! He was a key player in the fantastic 2005-2006 season, but at the end of 2008-2009 competitive year he was forced to leave Rapid. Still judged by many as a chaotic and inconstant player, Maftei went on playing at Unirea Urziceni which was defending champion by that time. He played even better in his first season here. Didn’t won another league championship, but participated for the first time in The UEFA Champions’ League, were Unirea gathered eight points in three matches with him as a starter. 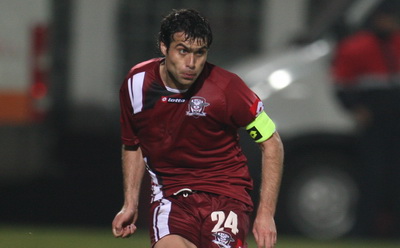 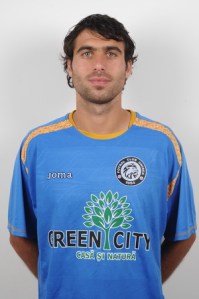 In the last game, he couldn’t play against Stuttgart, which determined the coach, Dan Petrescu, to say that if Vasile had been on the pitch, Urziceni wouldn’t have lost. But he wasn’t, so the Germans made a convincing 3-1 at home after they scored all the goals in the first ten minutes! It was the start of the decline for Unirea, but not for Maftei. Most of the players decided to leave at the end of the season, Vasile being one of the few that wanted to continue. It’s true, only until the end of 2010 but enough to beat, almost all by himself steaua and Dinamo, both with 1-0. OK, he didn’t score but had the necessary attitude which helped his colleagues to gain confidence. Most part of the other matches was lost and at the end of the season, Urziceni relegated. It wasn’t Vasile’s problem anymore because he had sign with CFR Cluj, also the defending champion. At 30 years, such a contract seemed a very good one.

And it was. Rapid also claimed him back, but consider him very expensive… Even though had many knee problems which kept him off the field for a lot of months, Maftei brought his contribution to the third title in the history of the club, in 2011-2012, with 15 matches and two goals. Again, the defender confronted with some medical problems and missed the first five matches in the UEFA Champions’ League. Still, he was introduced in the last match, the sensational win of CFR at Old Trafford, in front of Manchester United. He played little more than 15 minutes but secured the 1-0 lead with a couple of formidable clearances, one even in the stoppage time! CFR made ten points, but didn’t make it through the last 16 because of other things, that don’t necessary have anything to do with football… Still, his personal performance remains at high standards for 12 years.

OK, he may have a couple of awful matches, but what the heck?! He played 284 only in the first division, 45 in European competitions and 12 for the national football team of Romania. So, nearly 350 professional high class football matches! Adding to this that he also won eight important trophies, what we can say more than he is a special and extraordinary player???