Why did FCM Bacău have to die?

This year something sad happen, very sad… FCM Bacău, one of the most popular football teams from Romania stopped is existence. Due to severe financial problems, the team was retired from the second division and in these moments nobody knows exactly if it will ever be rehabilitated. Bad news for us, all football lovers… The club was led to bankruptcy by dumitru sechelariu, a man that never defended the interests of this team by his own. OK, many people from Bacău will claim that he took over the club in 1992 and held it for exactly two decades, with a couple of performances. But the big part of these performances came in the interval between 1996 and 2004 when, guess who was the mayor of the town… So, it’s quite clear from where the most financial resorts came from. All the people from Bacău had a bit of contribution. FCM wasn’t build by sechelariu, but surely is destroyed almost completely by him! 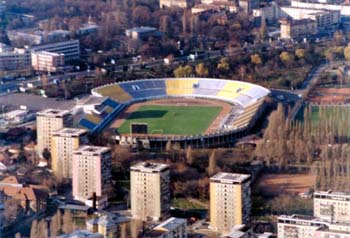 You want prove? No problem! Let us talk a bit about the best ever achievements of the club. The only Cup final came in 1991, one year before his arrival at AS, the name of that period. We lost against Craiova, but that year is the second and last when we participated in a European Cup. We severely lost in front of Werder Bremen, but who cared? The Germans eventually won the Cup Winners’ Cup. It was the second appearance, because the first one came in the 1969-1970, when FCM, at that time Dinamo, reached the quarter-finals! Yes, you’ve read right, a very high stage of a competition. A stage reached before Rapid, Craiova, Dinamo or Steaua in Europe. OK, it was in the Inter Cities Fairs Cup, which was not under the jurisdiction of UEFA, but in our days is considered the ancestor of the former UEFA Cup, now Europe League. 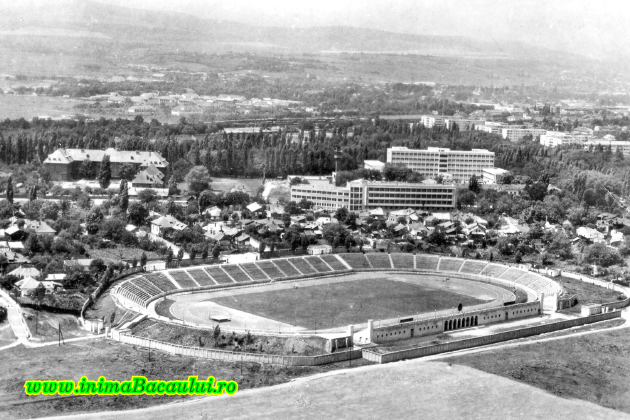 What about the best rank in the league championship? Between 1992 and 2012, Bacău only reached the fifth spot (1997 and 1999), lower than in 1973, when the team stepped one position higher. The fourth place remains the best from the history. On the other side, in 2009, FCM relegated, for the first time in its history!!! Quite a performance… We must remember that the team won it’s only title in 1998, in the Romanian League Cup and also played the next year’s final, but we can’t consider this, such big performance because that competition wasn’t consider official and had only two edition. Those two!

So, here are your proves for the wrong and greedy management which took place at Bacău’s most successful club. We didn’t won any major trophy, but the all-time Liga I ranking says that our place is on the 10-th spot. An extraordinary place for a team founded in 1950. Oţelul Galaţi was the first champion from Moldavia region, FC Vaslui is one of the most powerfull teams from our days and in Liga I played, in the last years, teams from Piatra Neamţ or Iaşi. But Bacău still remains the most popular, wherever people like it or not! The spot in an all-time ranking says it all!

I talked enough about errors and regrets, let better get a look on club legends and on the last years in the top flight of FCM. We’ll start with the last part, because it’s the most recent. And with this occasion I will expose the few merits of the owner: growing young and valuable players, some of them from the club’s youth system and some brought from some other places at a very fragile age. To exemplify, let’s mention a couple of them: Narcis Răducan, Cristian Ciocoiu, Florin Petcu, Andrei Cristea, Dorin Goian, Eugen Baciu, Florin Lovin, Valentin Bădoi (even though he made his debut in the first league at nearly 25 years! – he was spotted in the tird tier and soon went on winning the league championship alongside Rapid), Cătălin Cursaru, Marius Croitoru, Ştefan Apostol or Corneliu Codreanu. Not all made a successfull career afterwords but they defended with great honour the blue and yellow colours.

For example, Cătălin Cursaru became top scorer of the Liga I at the end of the 2001-2002, with 17 goals, including an outstanding bicycle kick in a 4-2 win against Dinamo. But more details about Cursaru can also be found on this blog. Speaking of that game, what a great encounter it was! Not only on the filled, where it was pure spectacle, but also in the stands were more than 20.000 suporters were present. A very big number if we consider that the capacity of the stadium consists of only 17.500 seats. Well, actually consisted, because right now all is a ruin, unfortunately… And the fans which love football from Bacău didn’t come in high numbers only at that game, but at each visit of Rapid, Dinamo or Steaua at Bacău. A little advantage was that the entrance was free, but their behavoiour and way to show the attachement for the team was unbelievable. Few provincial squads had, in the last ten years, the same fan support as FCM had back in the early ’2000. It passed only a decade, but it seems like at least one century spread it’s dust over Bacău football!

With many occasions, the stadium wasn’t full, but at least 8, 9 or 10 thousand spectators came to encourage their favourites. For a few years I was one of them and I’m proud to say this. But it’s also harder to accept the reality, the disappearance of FCM… With this occasion all the beautiful memories come back into my mind: that victory over Dinamo… A 4-1 against Universitatea Craiova…. A 4-3 in front of Farul Constanta… In fact, I guess this last episode from my mind it remains the best lived on the stadium from Bacău. I went at the match with a friend that didn’t like football too much and the visitors put the score at 2-0 with 29 minutes into the game. ‘I’ll leave, we’ll lose anyway’ – he said. I convinced him not to do that, but he added: ‘If we won’t lead at half time, I’ll be away’. And s the miracle started, thanks to a strike from Narcis Răducan and two from Cătălin Cursaru. The unreal became real and FCM got in front before half time. The opponents made it level, but in the 63 minute, Andrei Cristea, at 19 years of age by that time sealed the victory. It was outstanding! 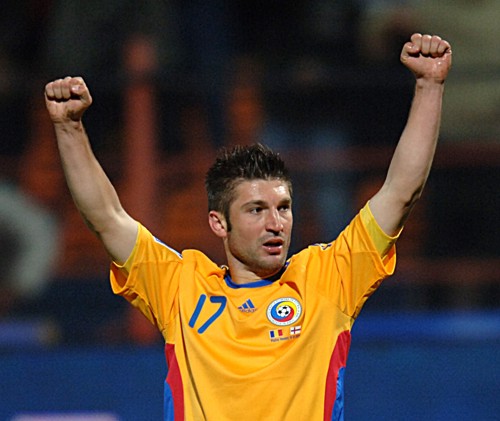 That event happened on 24th of August 2003. Wow! More than nine years ago! But on 20th of March 2004, in the second part of the season, another bug match consumed at Bacău. The one about which I was telling you above, with Craiova. A 4-1 victory, thanks to a hat-trick of Andrei Cristea. His first and only by now! A big achievement for a 19 years old footballer, an achievement which would eventually have bring him a transfer to Steaua Bucharest. Yes, the same man that at the end of 2009-2010 season became Liga I top scorer, with 16 goals, in the shirt of Dinamo Bucharest! Sweet memories… Many of you, who are reading this, may ask themselves why I’m writing such personal stories. Well, the answer is simple: because I want all the football lovers from around the World to understand that FCM Bacău was an important team in Romanian football. Maybe we haven’t fans as pasionate as other provincial teams, like Petrolul or ‘U’ Cluj have, but love for football existed in this city. Unfortunately others ‘murdered’ it… 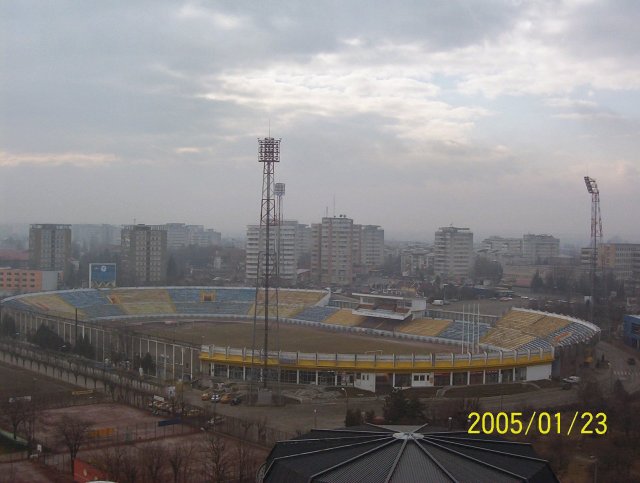 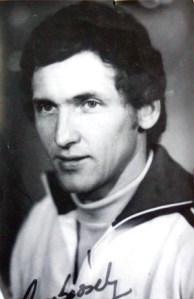 I left for the final phrase a few names. A few names of players that made history for this team… No, not like a statistic, because you can found this on the internet. Like a short presentation of Emerich Dembrovschi or Robert Andrieş. The first was a key player in the late ’60s, when Bacău played against Arsenal in the spring of 1970. The performance also brought him a selection to the national football team at the World Cup, where he also was one of the best. Also, Dembrovschi, scored the most competitive goals for FCM: 57. This number could have been over passed by Cursaru, but in five years he scored ‘only’ 49 goals. If this record looks hard to be broken, what do you think about one of Gheorghe Andrieş? This man played 319 games for FCM Bacău, the most of a single player in the entire history… Only memories… Hope it won’t remain like this too long! 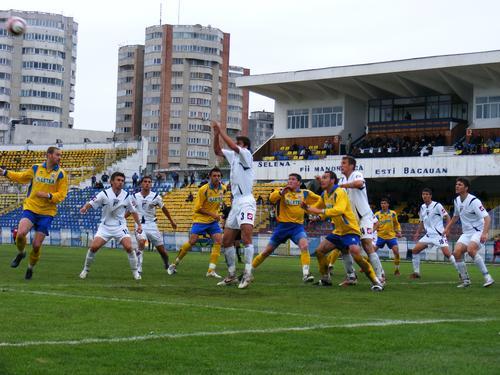 Oh, and by the way! Speaking of international performances, here we can also mention the 2-1 victory over Galatasaray from 2001. OK, it was only a friendly game, but the Turks, coached by Mircea Lcuescu, played only a couple of weeks earlier a Champions’ League quarter final – the first in their history – in front of Real Madrid and a year before they had win the UEFA Cup. So, quite a performance, huh? All thanks to Cursaru and Bădoi who scored the two goals!

Un răspuns la Why did FCM Bacău have to die?