England hosted in 1996, the first ever European Championship at which 16 teams participated. And logically, the organizers opened the party. It happen on the 8th of June, the same date as it will start in 2012. England faced Switzerland, on Wembley and this was the chance of Alan Shearer which put in the first goal of the tournament, in the 23th minute, against Switzerland. Until the final blow, the visitors came from behind and equalized thanks to a penalty well taken by Turkylimaz with seven minutes remaining in the game. It was the third consecutive 1-1 in the opening match of EURO after the ones in 1988 and 1992. For Shearer this remains a thick performance as he is better known for the seven goals scored at European Championships: five in that edition and two at EURO 2000, including one against Romania. Unfortunately, his achievement didn’t prove to be very important for his team, because England didn’t pass the semifinals in 1996 and not even the group stage in 2000. Still, those seven goals remain the second best performance for a player in the history of EURO, after the nine pieces put in by Platini in 1984. Besides those, Shearer scored 23 more goals for the national team from 1992 to 2000, when he retired. He was only 30 by than, but decided to leave international football and concentrate only on the career from Newcastle. In eight years he gathered 63 matches for England and from the 30 goals scored, 21 were in official games. Most curious is that Alan managed to score 18 goals (!) only on Wembley Stadium.

OK, at international level he hadn’t too many performances, but he surely remained in the hearts of England’s fans and mostly in the hearts of the supporters from Blackburn Rovers and Newcastle United. Born on 13th of August 1970, Sheared starting playing professionally for Southampton in 1988 and after four years, in 1992, he joined Blackburn. His performances for ‘The Saints’ were quite low, only 23 goals in 118 league games, but the officials of Blackburn looked like knowing what they are doing. And they did, because after four seasons with Alan Shearer in the team, they had many satisfactions. With 130 goals scored in 171 games, in all competitions for Rovers, Shearer helped the squad to win in 1995 the Premier League title. The third title won in the history and the first from 1914! Only in the 1994-1995 Premier League season, Shearer put in 34 goals in 42 encounters! That trophy remain the only one achieved with Blackburn, but his good performance from EURO 1996, were he became top scorer with 5 goals, brought him a transfer to his favorite team since childhood, Newcastle United. And the board from Blackburn was glad because of his departure. Shearer’s performances were outstanding there, but the 15 million pound that Newcastle paid for him was a record at that time and assured a big part of Rovers’ budget for the following season.

With Newcastle Alan didn’t win anything, but helped the squad to finish second in the league (1997) and to play two FA Cup finals (1998 and 1999), both lost. Despite all this he continued playing for Newcastle until 2006. That meant 10 seasons, 404 goals and 206 goals! In all competition! So, it resulted an average of 40 games and 20 goals per year! At the end of those seasons he even touch the title of the all time top scorer of Premier League, with a total of 260 goals and this without playing at giants like Manchester United, Liverpool, Arsenal London or even Chelsea London. We talked about Shearer as a team member, but we didn’t say anything yet about his individual performances. And believe me we have to tell a lot! Besides the top scorer title from EURO 1996 and the one from all the history of Premier League, the striker won some more goal scoring trophies. He was top scorer of Premier League in three occasions (1995, 1996, 1997), twice in the UEFA Cup (2004 and 2005 – the last, with 11 goals!). Shearer also holds some records regarding Newcastle as he is all time top scorer of the club in all competitions (206 goals) and all time top scorer in the European Cups (30 goals). Those weren’t all, but surely remain the most important. After retirement, Alan came out of football, with only a short break between April and May 2009 when he experience his first and last experience as a coach. And where else could he have tried this if not at Newcastle? Unfortunately, a single victory in eight games and five defeats didn’t convince anyone that he deserves another chance. 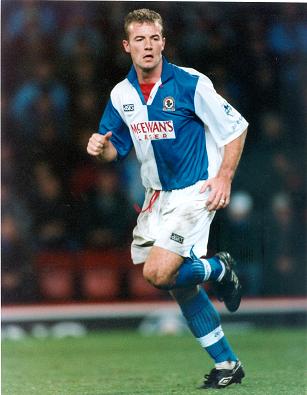