The gunner from Bacău

I know that Cătălin Cursaru is born and now lives in Ploieşti, but as a footballer, all his success was tied close to only one club: FCM Bacău. I remember that day, 31th of March 2001, when I went for the first time at a football match. Bacău was playing against Gaz Metan Mediaş and eventually won that encounter by 2-1, with the winner scored by Cursaru. It didn’t count that his decisive header was following an attacking foul, after the striker put his arms, to help him jump better, on the shoulders of the opposite defender… It was my first game and I got lucky enough to see Cătălin scoring. I also saw his debut, in Ghencea, against Steaua, when he put in two, despite the team lost 3-4, but unfortunately, I didn’t caught his second game, in fact his first on the home soil of FCM, and I regret that, because he scored a hat-trick, in a 4-2 win over Otelul Galati.

But how did such a brilliant striker arrived so unexpected at Bacău? Well, legends say that he was hided from Astra, the team from his native city, Ploieşti, by warning the local journalists not to put his name on paper, even though he was scoring in every friendly game. That way, Astra couldn’t see him and call him back. Still, the squad from Prahova remained with 30 percent of a future transfer, thing that forbid him to move at Hertha Berlin in 2002. But these stories were too often told to insist on them, so I will speak only about Cursaru’s phenomenal career. On second thought, his career wasn’t quite phenomenal, but his qualities still were. So, his strength, at a 1.83 meter height and 75 kilogram weight, was well doubled by fulminating speed and sprint. Plus, he got a great dribbling and the accuracy to shot very precise from difficult positions. That explains his bicycle kick against Dinamo, from late April 2002, when he became ‘Play of the day’ at CNN. Also, he is a great fan of Marco Van Basten and maybe his executions inspired him to score a fantastic goal in 2004, against Steaua, in a 2-2 draw, also at Bacău, like the Dutch did in the final of EURO 1988 in front of URSS.

OK, so the FCM’s officials saw these qualities from the beginning and assured that Cursaru will play for the Moldavian club. He was legitimated within a few weeks before the 2000-2001 season started and that was a great deal. In the first two matches he netted five times and at the end of the season, a total of 15 goals were in the account of Cursaru, in 26 games played. Officially, the team relegated, after a play-off against Farul, but the local authorities bought the place of FC Baia Mare and so FCM remained in the top flight. A great thing for the attacker as he helped his team to win a six place at the end of the 2001-2002 season which didn’t mean a qualification in the European Cups, but a top scorer title for him. In fact he did scored 17 goals in 29 matches. 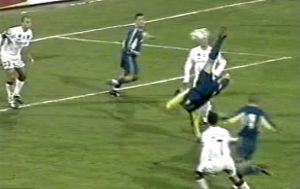 All right, he had luck when Pancu, the leading goal scorer, was injured at the beginning of the second half of the season and didn’t play until the end, but his performance remains a big one. I talked about that 27th of April 2002 night against Dinamo, everybody talks, but few remember other details. One is that two weeks before that game, Cursaru scored the only goal of the 1-0 home victory over Rapid, after Florentin Rădulescu, the opposite goalkeeper, shot the ball in his leg! An identical episode also happened on 30th of March against Braşov, when FCM won 2-0! The same period in which the Moldavians got seven victories out of eight games!!!! Unfortunately, they couldn’t keep it until the end of the season and ended on the sixth spot.

Nothing counted for Cursaru, because he was the king of Romania. Born on 29th of March 1978, he was only 24 and a brilliant perspective. He said that a transfer to Steaua, Dinamo or Rapid won’t interest him, because he may also win the league title with Bacău. He refused the teams from Bucharest, but a transfer in Germany was all that he wanted. Hertha and Bacău didn’t settle their terms and so the collapse was inevitable. Cursaru denied such problems, but they started to show up with the beginning of the new season. After 32 goals in his first 55 first league games, nothing was the same. The first step of the problems happened on 21th of September 2002. FCM was playing against Ceahlaul Piatra Neamt and the opposite defenders gave away two penalties. Both, executed by Cursaru and both saved by goalkeeper Gabriel Lefter. It was a shocker: the striker missed two spot kicks and the game ended in a 0-0 draw.

Six goals in the 2002-2003 season were very low for his potential, especially if we considered that he played in 25 games. It looked like Cursaru wasn’t the same. Or he was? The first two week matches from 2003-2004 stage were also horrible, as FCM scored zero goals, but after another four games, the situation was changed by 180 degrees. Cursaru scored again and not once, but seven (!!!) times, goals that helped the squad to achieve seven points. The initial three of them were obtained on 24th of August 2003, against Farul Constanta. I remember that day as if it was yesterday. The opponents were leading, 2-0, and a friend of mine, which was with me in the crowed wanted to leave. I tried to stop him, but it seemed no use… The lad said he will remain until half time, because only a change of result might convince him to remain until the end. And the turn over came in about ten minutes! Exactly before the break, FCM got three goals and got up in front with 3-2! The achievement was as remarkable as the final result brought all the points, as our favorites won 4-3! Obviously, Cursaru scored again. That last ‘bullet’ attracted the attention of Brann Bergen. The team from Norway tried to transfer him in 2005, but, once again, all was in vain. It looked like that was all that Cursaru can stand for. Luckly, he managed to recover his confidence. But just for a while.

After, the attacker put in a hat-trick against Dinamo, but that didn’t help his team which lost 3-7 in Bucharest. But he was Romanias’ top scorer again, with seven goals after six matches! But that didn’t last, as he scored zero until the end of that season, despite playing a total of 27 matches. His adventure looked like closing to an end, but one more season expected him at Bacău. For this one he spared only four goals, his last for FCM. The master piece was the one against Steaua, in 7th of November 2004, in a 2-2 draw. It was a Van Basten stile kick, which put Bacău in front, 2-1. His journey at Bacău was near to an end and so, in the summer of 2005, he left. After five years, 140 matches, counting also the 10 from the Romanian Cup, and 52 goals, from which 49 only in the first division, Cursaru left Bacău. Initially he went at Vaslui, after Progresul Bucharest. His only performance here was that he netted two more goals that helped him pass over 50 in the national league. Even though he was only 29 years old, his career was gone and this affirmation is firmly held by the names of the teams he used to play after: Aerostar Bacău (III tier), Tricolorul Breaza (II tier), Prahova Tomsani (IV tier) and now Filipestii de Padure….