Kamamoto, the gunner from Kyoto

The team football from Japan lives now its best years in their history as the national team qualified at four World Cups in a row, since 1998 and at the moment is one of the best squads from Asia. Japan also appeared in the last 16 at the tournaments from 2002 and 2010, after sidelining more prestigious names in football, such Russia, Denmark or Cameroun. So, it’s clear that we might say that the best player from the history of the Japanese is maybe one between Nakata, Nakamura, Ono, Inamoto or Honda. But no one mentioned above is at least ready to challenge with his achievement the position of one man who didn’t play in those years, but who brought a bronze medal for the country in the Summer Olympics from 1968, a competition in which he won the title of top goal scorer, with seven pieces.

Kunishige Kamamoto was born on 15th of April 1944 at Kyoto and measuring 1.79 meters he got an unusual built for a Japanese native. He started playing football from his childhood but turn full professional when he was already 23, in 1967, when signed for Yanmar Diesel, in fact the only team that he ever played until he stopped his career, in 1984. And in the last six seasons as a player he was also put in charge as a coach! Kamamoto manage to score 262 goals in 311 matches for this team, which is the ancestor of Cerezo Osaka. For the national team, nobody could tell exactly how many goals he scored, as Kunishige was playing in the first side from the time he was a member of Waseda University. Still, it is known that he put in more than 70 (probably 75) in about 76 matches! These numbers transforms him by far in the best goal scorer in the history of Japan if we consider that the next position is occupied by Kazuyoshi Miura, with 55 goals. 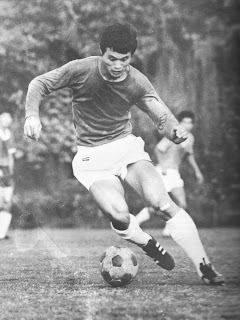 Kamamoto’s peak of form came in 1968, when he became top goal scorer of the Summer Olympics, with seven goals, that helped Japan to win a memorable bronze medal. He first netted a hat-trick against Nigeria, in the group stage, which brought a decisive 3-1 win, because this result offered the Asian team the possibility to pass through, even though it was only the opener. Japan only made after that two draws against Brazil (1-1) and against Spain (0-0), leaving the South-Americans out of the competition. In the quarter finals France became the victim of the striker, who managed two goals to seal another 3-1 win and an historical qualification to the semis. The game against Hungary was a total disaster, as Japan lost 5-0, but kept a good morale for their last match of the competition: the 3rd place encounter. And what a rough match it was, because Mexico, the hosts of the Olympics, was expecting them. But this didn’t scare Kamamoto not even a little, as he scored both goals of a 2-0 victory, in front of… 105.000 people who crowded Azteca Stadium.

So, many might ask themselves why Japan didn’t qualify to a World Cup earlier than 1998, considering that the 1970 tournament, when Kamamoto was in the pick of his form, was also held in Mexico. Well, the striker was hospitalized in June 1969, because of hepatitis and recovered entirely in the early 1970, when the qualifications were over. That was the moment when the “Bronze generation” missed out the chance to build a super squad and so the Japanese football went into a long stagnation. 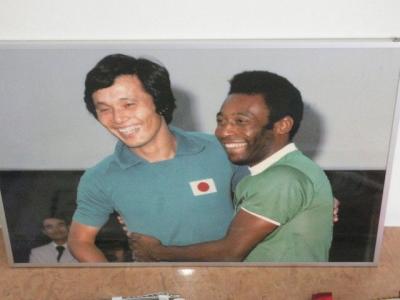 Big names from football where familiar with him, as Kamamoto scored against some of the greatest squads in the World like Arsenal, Palmeiras, Monchengladbach or Benfica and played alongside with Pele, Overath, Cruyff and Beckenbauer. Still, despite all his individual skills and performances, the striker only one four league titles with Yanmar Diesel, from which the first in 1971!