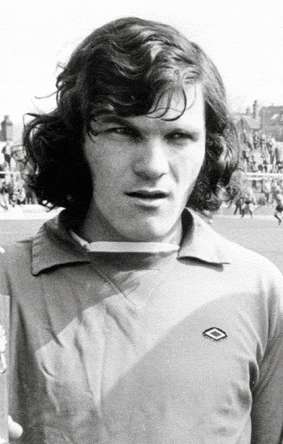 With a strange name, Stephen Victor Death is quite unknown between football lovers, but he surely has some things with which he can be really proud. Born on 19th of September 1949, in Elmswell, Suffolk, he began his professional career at West Ham United in 1967, but in two years spent there he didn’t play but one single match. That happened at the end of the 1968-1969 season, when he appeared in draw, 1-1, against Manchester City.

So, in 1969 he was originally loaned at Reading, but it turned out to be a great player for its new club and so he signed a contract that finally lasted until 1982, when he stopped playing. In total, he appeared in 537 games for Reading in all competitions, 471 in the league system! He impressed from the first season, but his new team made strong efforts to buy him, because the 20.000 pounds fee asked by West Ham seemed impossible to sustain. But Steve made great performances and so, Reading paid the money, which meant then the biggest amount paid for a player in all their history.

Reading, founded in 1871, didn’t play in the first two divisions in those years, but still, Death achieved some great records. He was named best player of the squad in four occasions (1970, 1973, 1974 and 1977) and in the 1978-1979, while the team was playing in the fourth division, he managed to keep 26 clean sheets. During his long career at Reading he also achieved to appear in 156 consecutive first team matches, which remains a club’s record as well as are the four distinctions of best footballer of the year.

And that’s not all, because another record made Death even more popular. Until 31st of January 2009 he was the man who gathered the most consecutive minutes without conceding a goal in all English league football, with 1.103. It happened at the end of 1978-1979, when Reading won the promotion in the third tier. In the last 11 matches (against Grimsby, Port Vale, Crewe, Portsmouth, Bournemouth, Aldershot, Hartlepool, Darlington, Halifax, Wimbledon and Port Vale), nobody could score him a goal. But three years ago this achievement was broken by a legendary man, the Dutch between Manchester United’s posts, Edwin van der Sar who set than a World record, with 1.311 minutes without letting the ball passing him.

Death retired in 1982, at only 33 years and returned to his native city for a while, before he came back to work in Reading. But he didn’t work for the club, but as a green keeper at a local golf course. In Reading he also died on 26th of October 2003, when he was only 54. The man who became a legend of Reading and who’s name frightened many opponents, ended his life, defeated by cancer.

He’s retirement came as Ron Fearon became first choice goalkeeper at the beginning of the 1981-1982. Death was a brilliant goalkeeper, but he used his speed, agility and reflexes much more than other keepers, and had to step back when this qualities started to waste. All of these because he only had around 1.70 meters, a very low high for a goalkeeper. That fact, along with his temper, from the beginning of the career, made him lost the challenge with another young goalkeeper: Peter Shilton (he was only one day older than Steve!), who became an English legend after. Both were playing for England Schoolboy squad in the early ’60, but eventually their ways in life get totally different.