Can it be worse?!

When you lose a league game with 10-0, it’s very clear that you have some big problems. This was the score in a match from the Dutch First League. But not in any match, as it happened in a clash between PSV Eindhoven and Feyenoord Rotterdam, two great rivals from Holland. In the first half of the season, that was an historical moment. 10-0 meant the biggest score difference ever, between two rival sides from the most important European football divisions. So, Feyenoord’s humiliation looked very heavy. It seemed that nothing in the world could erase this disgrace, at least not in the near future.

But the team from Rotterdam took its revenge sooner than anybody could imagine. With only three game weeks left, PSV was in first place of the Eredivise, level with Twente and with only one point ahead Ajax, the team from the third spot. This meant that the club of Eindhoven would go on winning the away match from Rotterdam. How hard could it be, to beat a team which you slaughtered with only a few months ago? What so ever, Feyenoord had the ambition to wipe of the bad impression from that awful game. They could have considered a draw that could push PSV on the third place. But the mid-table team wasn’t happy with only that. 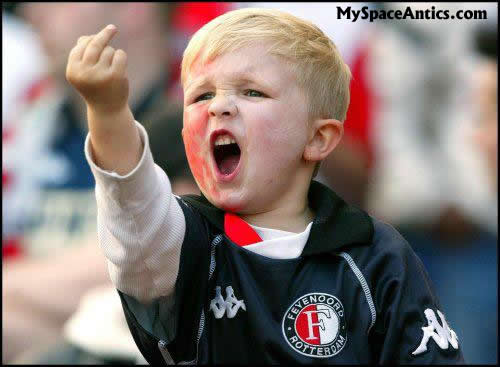 So, in the Easter Day, Feyenoord beat their rivals with 3-1 and, as Twente and Ajax won their games, PSV slipped two places down the table and has now three points to recover if they want to have a chance to become champions once again after three years. The biggest problem is that, the gap can only be recovered in two game weeks, the number that’s left until the end of the season. As we imagine, is quite hard for Eindhoven even to catch a second place. So, the 10-0 from the first half of the championship is good for nothing. But still, it remains the biggest win in the history of the club and this will probably last many decades. We could say that Feyenoord stole a title from Eindhoven, but this consolation can’t be enough as they won’t even get a place in the next Europa League season.

Un răspuns la Can it be worse?!