When you ask somebody about Romanian football, they might say that Chivu and Mutu are two good players. But people forgot about one of the most talented footballers, Cristian Săpunaru. He hasn’t Mutu’s dribling skills, neither Chivu’s elegant style of playing, but his strenght and determination on the field, helped him to grab a five year contract, at Portugues giants FC Porto. Still, he wasn’t content only to take part here, but he proved to the coach that he deserves a place in the starting line up.

In his first season on Dragao, he managed to play many times, especialy in the UEFA Champions’ League, including the quarter final against Manchester United. At the english side, Cristiano Ronaldo was playing and was in great form. But he did not stand a chance in the one to one duel with the Romanian right-back. Săpunaru annihilated him, and even tough United qualified for the next round, thanks to a goal from Ronaldo, the Portugues could only score a goal from more than 35 m. The 2008 Golden Ball, didn’t manage to approach much of Helton’s goal.

The following season, a couple of injures made Săpunaru a reserve. The things got worse at the begining of 2010, when he hit a steward after a lost derby against Benfica. In the Portugues League he was suspended for six months. His career was in danger. The club looked for a team at which he can loan him for this period. Many sides from the Liga 1 Bergembier were very anxious to have him. The most convincing offer came from FC Vaslui, a club that was ready to give him a lot of money, but Săpunaru choose to play for the team he loves: Rapid Bucureşti. In fact, this was the club from which he left to FC Porto.

From childhood he was a declared supporter of this team, taking part as an active member of the supporters association. Even when he played for first league team, FC Naţional Bucureşti, now Progresul, he went on the Giuleşti stadium to support his favourite team. In 2006, when the rumors about his transfer at Rapid were very strong, his friends teased him, that he would not play at his real value in the Cup final between his team, FC Naţional and Rapid. That made him angry, and said that he wants more than everything to win the Cup. Even he loves Rapid, his professionalism took first place. Unfortunately he had lost the final, but his dream to play for the club from Giuleşti became true. He did not impose in the first eleven from the start, but durring the 2007-2008 season his determination and his precise way to play helped him win a place in the first line up. Also the fans loved him. After scoring a goal at Iaşi, against Politehnica, he did the same on the Valentin Stănescu Stadium, against rivals Steaua. It was the only goal of a game that never ended… 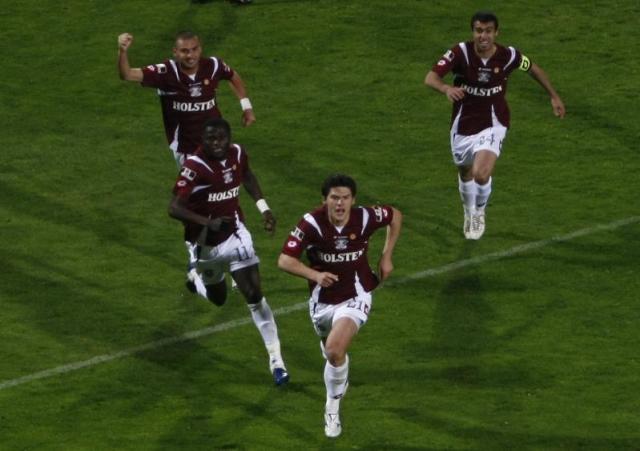 He became an important player for Rapid and also for the fans, but things unexpected changed: FC Porto made a transfer offer that the Romanian club could not afford to refuse. After only two years, he left the team. A year and a half more and he is back home. The incident in which he was involved in Portugal might forbid him to play even in Liga 1. After a few weeks of expectation, the verdict was positive: Săpunaru is allowed to play in the Romanian championship. He started by scoring a goal against Internaţional Curtea de Argeş, that proved to be decisive. His playing style got more consistent with every passing week and in April he made one of his greatest games against Steaua, in that 5-1 crush. Even he did not scored, Cristian considered this result a revenge of the episode that happened two years earlier, when he did score a goal. For the end of the season he played exceptional, and helped his team in many occasions. His goals against Pandurii Târgu Jiu and against FC Braşov were very important, but not enough. The team finished 7th and did not managed to take part in the next year European Competitions. Săpunaru ended his staying here and returned to FC Porto.

It seemed more difficult now to grab a place in the first line up. Despite playing very well at Rapid Bucureşti, his direct rival on the right side of the defense was George Fucile. The Uruguayan made an excellent performance at the FIFA World Cup, being one of the best players of the team that finished 4th. But Săpunarus’ determination helped him to win the battle, and became the first choice for the defense right side. He did not played in every game, but he did so in the most league matches, being one of those players that helped Porto to take a big lead from the start of the season. He was one of the best players in the 5-0 crush against second-place team, Benfica Lisabona.

The position that Săpunaru got during the years, recommend him as one of the best Romanian footballers of his generation, along with other defenders such as Răzvan Raţ, Dorin Goian, or especialy Cristian Chivu.